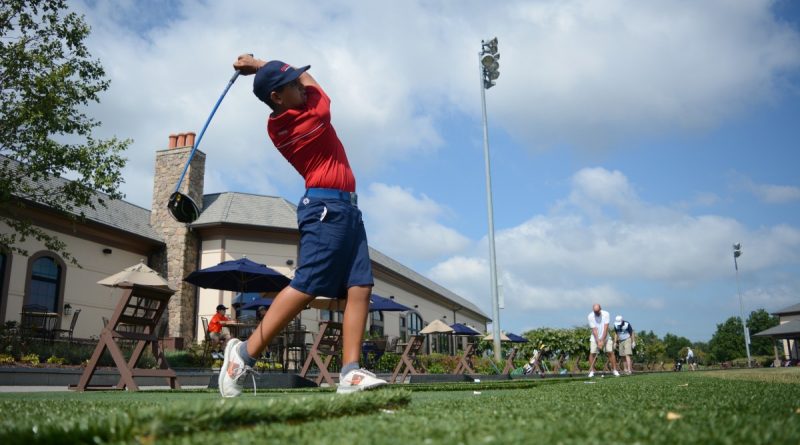 Sihan Sandhu is a really nice kid. He’s 10 years old, a student at Creighton’s Corner Elementary School, and he fidgets restlessly in his seat when you’re talking to someone else, but sits still, looks you in the eye, and speaks calmly, intelligently, and politely when you talk with him.

He’s also probably one of the best golfers his age who has ever lived.

At the U.S. Kids Golf 2016 World Championship at Legacy Golf Links in Pinehurst, NC, earlier this month, Sihan scored 23 under par, shattering the previous record of 18 under. The next closest finisher in the boys 10-year-old category shot 6 under par, placing Sihan 17 strokes ahead. The next best score in the tournament was by 11-year-old Shubham Jaglan from New Delhi, India, who tied the previous record of 18 under.

Sihan’s stunning success is supported by sacrifices and work by his whole family. His father, Ruby, left his job at a major IT company and started his own consulting business so he could spend more time with his son. That decision came after the family had planned a trip with Sihan to a tournament in San Diego, but a major project at work interfered.

“[My boss] said ‘you know what, tough luck, you can’t go,’” Ruby Sandhu said. “That was the time I made up my mind. I said, money or no money, less money, whatever. The most important thing was we wanted to support him the best we can. From that day onward, we started working on a plan.”

He and a longtime friend left the company to found RighIT Solutions LLC, which opened on April 1.

“Now I probably work more, but I can work on the weekend, I can work at night, nobody tells me what to do,” Sandhu said.

That gives him a little more time for his other job: Sihan’s caddy.

“At times, I actually thought I was not good enough for Sihan,” Sandhu said. “When the professional caddy’s there, he can read the putt. He can read the green much better than I do.”

It doesn’t seem to be slowing Sihan down. He spends time every day at the 1757 Golf Club in Ashburn, coached by Adam Harrell and Nick Guyton and with his dad by his side holding the clubs.

According to a spokesman for Billy Casper Golf, which owns the 1757 Golf Club, Sihan won “Player of the Year” for three consecutive years on the local golf circuit, winning every tournament he played in. He now competes across the U.S. and Europe, twice winning the U.S. Kids European Championship in Scotland. He has won 13 regional and national invitational events in U.S. Kids Golf, the most wins by any junior golfer, and has even won Mid-Atlantic PGA events against golfers three years older than him.

Harrell, who previously coached Lexi Thompson—a 2016 Olympian and the youngest-ever golfer to qualify for the U.S. Women’s Open—says Sihan is the hardest-working golfer at the club.

“Having that ability to do that at 10 is very unique,” Harrell said. “He’s dedicated, he’s passionate, and he’s very easy to work with, because he’s hungry for knowledge. He’s always pushing for more information, more knowledge, and he’s willing to try all the things.”

People at 1757 who know Sihan say his work ethic, his intelligence, his love of the game, and the support from his family set him apart.

“Over the years, you see plenty of kids who seem to have great potential, and want to do things, and the parents who are sometimes almost more excited than the kid,” said Gary Huebner, the general manager of the 1757 Golf Club. “They’ve developed a really, I think, a positive, nurturing attitude toward it, to kind of let him take it at his own pace. They never feed him what he doesn’t want to eat.”

“Some of the kids, it’s almost like work, whether it’s parental pushing or trying to make their parents proud,” Harrell agreed. “He just loves it.”

In fact, Sihan’s parents don’t have to push him. He has a relentless drive to play and improve, and a good attitude even when he has a bad round.

“He loves it,” Huebner said. “He comes out here in the winter. We have to shovel a spot out, and he’s hitting balls out into a snowbank.”

“What separates him is the fact that he wants it more than most,” Harrell said. “Some kids want to be good. He wants to be great, and I’ve seen that one other time, and that was with Lexi Thompson.”

Sihan says he wants to go pro one day.

“I knew I wanted to be a golfer when I was 6,” Sihan said. “Dad influenced me, but I started myself.”

“He has a chance to do some great things,” Harrell said. “I think the key will be, as he ages, and as he gets into higher level competitions and kind of falls into a little more adversity, how he comes through that. And my instinct says he’ll come through that very well.”