Future Masters: Gupta makes charge, but Sandhu wins 11-12 age division after round is wiped out 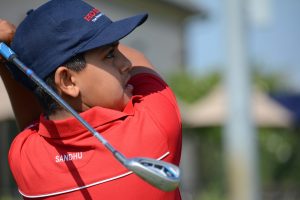 Abhay Gupta handled himself with remarkable composure. So did Sihan Sandhu.

Gupta was leading by six shots when the final group was stopped by a weather delay on the 16th green during the final round of 11-12 age division at the Press Thornton Future Masters.

Gupta was in position to record one of the greatest back nines in the history of the tournament – let alone one played in a steady rain that grew worse by the minute. The 12-year-old birdied five of the first six holes on the back nine to seize control of the event.

Mother Nature ripped it away from him. Officials deemed the Dothan Country Club unplayable – and it certainly was – and halted the event. When the rain continued, the final round was cancelled, wiping out Tuesday’s play. The champion was determined by the 36-hole results and Sandhu won at 7-under-par 133 – one shot better than Gupta’s 134.

“I think we all know who won,” said the 11-year-old Sandhu of Ashburn, Va. “Abhay won the tournament. If we finished out he’d probably have shot 64, like I did in the first round. I had my day and he had his day. Unfortunately, his day was cancelled.”

Gupta, from Concord, N.C., home of Lowe’s Motor Speedway, displayed the racing luck of Kyle Busch – but unlike Busch was exceptionally poised and gracious at the outcome.

“I’m very proud of the way I played. I played really, really well,” the runner-up said. “They had to end at 36. It’s the only way to make it fair. It’s a little disappointing, but I can’t do much about the rest.”

Tournament director Kevin Klein said the decision to completely erase the final round was the best option.

If the front nine had counted, Gupta would have been the champion. He shot even-par 35 on the front. Sandhu had a triple-bogey on the par-5 No. 4 and a double-bogey on No. 6. He lost balls in the water on both holes.

In fact, Sandhu had fallen to third place, a stroke behind Allan Kournikova, when play was stopped on the 16th green.

“I’m playing really good,” Kournikova said before play was cancelled. “I’m 2-under and just missed a two-footer for birdie. Abhay was pretty hot. I don’t think it was nothing out of the ordinary for him. When we play our game, it works.”

Officially, Kournikova of Palm Beach, Fla., finished fourth. He started the day at 2-under 138. Jay Brooks of Boca Raton, Fla., completed the foursome. He was 3-over through 15 holes and said he had a “long day,” but officially finished third at 4-under 136.

“It was fun. Everyone was hitting good shots. We didn’t do much wrong,” Brooks said. “A couple bad shots here and there. It was hard to read putts.”

“He just kept making putts – over and over,” he laughed.

Gupta inherited the lead after the fourth hole when Sandhu made the triple-bogey. Gupta bogeyed No. 5 but birdied No. 7 and turned at even-par 35.

He separated himself on the back nine. He hit a gap wedge to 10 feet and made a birdie putt on No. 10. He spun his tee shot on the par-3 No. 11 back into the fringe, but chipped a 3-wood into the cup on a 20-footer. He bogeyed No. 12, three-putting from the front edge of the long green to the back hole location.

On No. 13, he hit choke-down 7-iron that hit on the green but ran over it. He chipped in for birdie.

He didn’t let up. His pitching wedge approach on No. 14 landed eight feet from the hole and he made the birdie putt. On 15, he stuck another good wedge shot inside of 10 feet and made the putt for his fifth birdie in his first six holes of the back nine.

He never got a chance to finish the next hole – or the two after that.

That’s not to suggest Sandhu is an undeserving champion. Remember, he shot 7-under through 36 holes, including a first-round 64. The 36-hole leader put himself in position to win the tournament.

“He didn’t want to win this way,” said his father, Ruby.

Sihan Sandhu has won twice in Europe, has 13 regional wins and 19 local wins in Virginia. He won last year’s 10-year-old age division at the U.S. Kids Golf World Championship at Pinehurst, N.C. He posted rounds of 63-62-68 for a 23-under-par 193 total on the Legacy Links course at Pinehurst that week and won by 17 shots.

He won by one at the Future Masters. With an assist from Mother Nature.